The man who inspired the movie “Rain Man”, Laurence Kim Peek had a special ability which makes him a superhuman in my eyes because for people like me who are interested in the concepts like photo-reading, he serves as a great example. 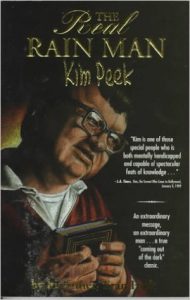 Kim possessed a special type of memory that’s known as photographic or eidetic memory, people also called him a megasavant as he had development disabilities that caused him to have this amazing ability to recall everything he has ever read.

He was able to scan the pages of any book, one with his each eye and all those information got stored in his memory far better than anyone who has spent a lot of time reading books. This made him popular as the person who can read two pages at once.

It is said that Kim Peek stored more than 12,000 books in his memory and he retained the information quite accurately. Unfortunately, he passed away in the year 2009 at the age of 58, but the incredible potential of the human brain he has demonstrated with his amazing skill will always be remembered.

They Shared the Same Shadow

Kim Peek can be often heard saying that his father and he shared the same shadow; this is very true because Kim’s father Fran Peek’s love for him cannot be described in words.

Fran decided to raise Kim and make him like other people when doctors suggested him to send his son to a mental institution due to his abnormalities.

Kim was born with a large head and he was diagnosed with damage to the cerebellum, which made the doctors to conclude that he was mentally retarded, won’t be able to walk, won’t be able to learn things like other kids and would die before he turns 14.

Fran refused to believe in what they said; he kept his hopes high and succeeded to give a good life to his son.

Since Kim had certain developmental disabilities he needed assistance in various basic tasks, for which his father always stayed around him.

The Price Kim Peek Paid for Such an Extraordinary Memory

Apart from what we have discussed above that makes Kim an erratic person with behavioral differences, there are few other things where he was different from others.

The analyses of Kim Peek’s brain showed that the major nerves that forms a bridge between one’s left and right brain hemisphere was missing in his case. Due to this the fibers that were meant to be a part of that connection, formed other different brain connections that were too complex and unique.

People who studied his brain say that this missing link between his right and left brain hemisphere could be the reason behind his exceptional ability to memorize.

But, Kim lacked some normal skills. Like, he was unable to connect with people properly which made it difficult for him to make new friends.

There are some brain activities that allow us to interact properly with others which involves our interest in knowing about people with whom we connect, on the other hand Kim’s brain functioning when it came to social activities made him too focused in himself rather than others which made him terrible at social interactions.

Another price he paid for this different brain structure is his inability to understand metaphors, he processed information more objectively without much subjective interpretations.

Despite of having such an amazing skill, his IQ score was below average.

A Miracle That the World Has Never Seen Before

The world has seen many miracles, there has always been people with extraordinary skills, but none like Kim was ever born.

There are methods using which we can boost up the reading ability process in kids, but Kim Peek learned to read at the age of two. He devoured encyclopedias when he was just four and his love for knowledge made library his home.

He answered questions related to politics, history, science, sports, directories, etc. so accurately that one could have called him a living Google.

Kim was a calendar calculation wizard and he loved to surprise people with their birth related information, you could have taken him to any part of the world and got accurate directions from him between any two cities. I just cannot explain how marvelous his skills were, the more I read about him, the more curious I get.

Kim Peek gained extreme fame with the success of the movie “rain man” in which the character played by Dustin Hoffman was inspired by him.

Dustin was so intrigued by Kim’s abilities that he suggested his father to bring Kim in front of the world. After that, the world came to know about a true miracle that proves how amazing human brain is. To know more about Kim, you can read the book “the real rain man“.

I hope you enjoyed this post. Kim proves that it is possible to have such memory and there some photographic memory training exercises that you can use to develop eidetic memory. I also suggest Zox Pro Memory Training program for this purpose.

Here’s a documentary on Kim you may like to watch: –

What are your views about Kim Peek and photographic memory? What you would have done with such skills? I would love to hear your thoughts on this, so please do comment below before leaving.

How to Make Your Own Affirmations

Side Effects of Energy Healing – Price Paid for Spiritual Progress

8 Tips on How to Overcome the Fear of Public Speaking