The moment you are attending a sad death ceremony, your kid might be busy laughing with his imaginary friends. 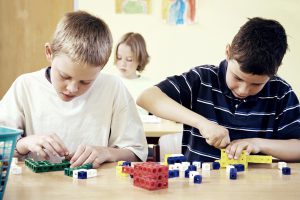 You may be worried about the financial crisis, and your kid might be screaming with excitement in his Ferrari that he made by arranging pillows.

You could be frustrated while handling household chores whereas your kid might have already prepared lunch for him and his friends in his dream world.

Here we will discuss the gift that we all have been blessed with but, we usually leave it behind when we are growing up, it is that magical mental ability known as “Imagination”.

We can read many books on the techniques to visualize the right way still what we will learn is nothing compared to the creative ability of kids, they do it naturally for the fun unlike adults who always have a reason for doing something.

Now, it is time to acknowledge the importance of imagination and know that imaginative kids truly are “genius in the making”.

Ever thought what differentiates us from animals? – First is that we have the ability to consciously choose our thoughts and second is fantasizing.

Ever saw any animal in a deep hypnotic trance of his fantasy? – Lol, no they can’t do that. But, we can! and it is the ability that lead us to all the amazing discoveries.

As Kids We Had a Very Good Imagination

You may remember or may have forgotten that age when you stopped living in your dream world.

We were taught to live in – the reality. 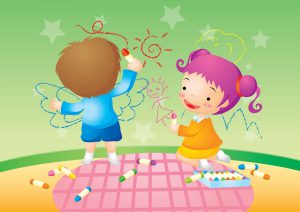 A “reality” that is just a limiting belief imposed by society.

We are yet to discover our true potential and the lack of knowledge that is killing the “genius” inside every kid at an early age should be completely eliminated for the next step in evolution.

An Example from My Own Childhood

I continued to use my imagination as a child for quite a long time. So, I remember some instances and I would like to share one incidence from childhood with you, which makes me to adore the “Mega Genius” inside every kid.

Ironically the vivid imagination that I am yearning to develop now is something I was an expert at doing when I was a kid- I know it is the story of us all..

I was shifting from my old house to new one recently and while packing I stumbled upon an old drawing sheet (from when I was about 7-8 years old) which evoked mixed emotions inside me.

First was the excitement to find something from my childhood, second was the bliss that brought smile in my face, third was the amazement of what I had drawn on that sheet and fourth was the whole recalling of the day when it was drawn, which brought me a feeling of sadness to have lost the genius inside me (moreover a realization of how we all forget to use this gift with time) – however, the learners can develop that ability again.

It was a spaceship (a huge one), round shaped.

The spaceship had a tail with a spiral design, which was connected to five tubes bulging outside and going back inside.

I was in my classroom with a friend of mine.

She appreciated me for the drawing and asked “What is that spiral design with those tubes?”

I said “it is a fuel tank for this spaceship and it receives energy from the explosions in the stars, the sound of those explosions passes through these rods and gives electricity to the spaceship”

I sat down to think.. for that innocent kid it was mere an expression of his dream world. But, a grown up guy knows that –

“Sound is energy”…The 7 year old knew nothing about the true nature of energy.

“Sound to Electricity- Energy can be converted from one form to another”..The 7 years old will get to know about physics later on.

“Explosions in stars”.. Do you think I knew about supernova explosions at that age?.. no way..

Finally, a spiral.. We know large gathering of energy forms vortex and a vortex in a 2D form is a spiral of course!

Wow… this may sound like just a logical interpretation of a trivial picture made by a kid to people who use their “reasoning mind” a lot.

But, for those who knows the power of imagination… It is totally a different story.

Whatever conclusions you may have drawn from this, please know that “Imagination” is a gift to us and when it comes to kids, as the theme of my previous post says- let them dream.